There are seven Centurion clubs worldwide (UK, Continental, USA, Australia, NZ, Malaysia, and Africa) with a total of 1,531 unique members.  One person, the legendary Sandra Brown (203 runs/walks of 100 miles or further completed to date) is a member of all 7 clubs.  I am a member of three (New Zealand, UK, and Continent).  Click here for Rob Robertson’s summary of the worldwide Centurion club memberships.

The race venue alternates each year between Schiedam and Weert.  I missed the 2017 race but in 2018 I returned to Schiedam and improved my time, covering the 100 miles in 20 hours 44 minutes, so in my mind I fully expected to complete this year’s race in Weert (my first visit to Weert) in under 21 hours again.  Unfortunately, it was not to be.

I met Kathy and Suzanne at Richmond Station just after 8am on a rainy Friday morning for the drive down to Dover (about 2 hours usually) and our DFDS sailing from Dover to Dunkirk followed by what should have been a 3 hour drive to Weert.  To cut a long story short, we arrived in Dover minutes before boarding for the 12 noon sailing commenced, a sailing that carried bus loads of teenage children meaning that there was absolutely no peace and quiet on the sailing, and then it took 5 ½ hours to drive through to Weert.  Not the ideal preparation for race day! 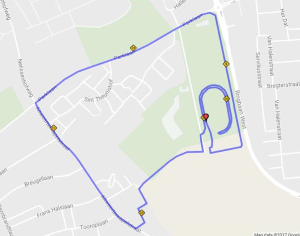 We were to walk 50 laps of a 2 mile loop that started and finished on an athletics track and covered the sounding neighbourhood.  Whilst almost completely flat, it was not a fast course, and in places it required concentration (especially at night) to avoid tripping over on the slightly uneven paving stones along one section of the course.  Immediately after starting each lap we left the athletics track and followed a footpath that led around a couple corners and up to a quiet road section which we then followed for a few hundred meters until we re-entered the grounds of the athletics centre and then on to the track for a lap in lane 7 walking clockwise followed by a U turn after almost 400 meters onto lane 1, and a final almost 400 meters to the end of the lap.

After 50 laps of the course, anyone who wanted to continue could walk for up to 24 hours  elapsed time, with the last 30 minutes being confined to the athletics track.  In Schiedam I had walked 183km and 185km and my intention was to do similar (or better) again this year.

We pitched our tent on the outside of the track, not far from the entrance which enabled us to visit it near the start and end of the track section of each lap if necessary.  It was extremely windy on Saturday morning and, rather than focusing on preparing for the race, I spent way too long ensuring that the tent wouldn’t blow away during the race – but that isn’t an excuse for my race performance.

My plan was to start at 7:30/kilometre pace, which was 24 minutes per lap, which with some slow down in the second half of the race, should give me a 100 mile time of around 20 hours and 30 minutes.

I was carrying a couple minor injuries going into the race, and whilst I didn’t expect them to cause any issues, if they did I was going to ease up and aim for a time of around 23 hours for 100 miles.  I’ve found in the past that an injury that has been bothering me in the lead-up to a race will often completely disappear, never to return, as soon as the race starts and whilst this wasn’t completely true this time, the injuries didn’t impact on my race at all.

I settled in to the race in 14th position for the first few laps and after 5 laps I was just 28 seconds down on 24 minutes per lap pace.  By 10 laps I had moved up to 10th place and was 9 seconds ahead of pace, and feeling reasonable – possibly not as fresh as I would like, but reasonable.

And that was it, from there on in, my race gradually got worse and worse.  I don’t really know what happened, but my 12th lap took 24:52.  It was my slowest lap to date, but would end up being my fastest lap of the rest of the race.  On the following lap I decided to have my first can of Coke.  I normally try to avoid processed sugar during the first 12 hours of any race, but I wasn’t feeling good and needed a kick-start.  I also switched from listening to podcasts to high tempo music – something I also don’t normally need to do until mid-race, but also something that normally gives me a boost.

I eventually reached 50 miles in 10 hours and 30 minutes.  My planned pace was 10 hours flat although I would have been happy with anything under 10:10.  Any chance of a PB was well gone now but I still has 11 hours and 7 minutes to complete the next 50 miles if I wanted to beat Gerald Manderson’s 1998 New Zealand M50 record time of 21:37, and I used that as motivation for the next few laps.  But I was getting slower and slower and beginning to wonder if I could even finish the race.

It was time to try some new strategies.  With two races of 250 miles coming up later this year, I had downloaded a range of different music as well as some stand-up comedy to listen to, so I tried both of these.  The stand-up comedy might have been funny if I wasn’t 14 hours in to a race that I no longer wanted to be in, but it wasn’t helping me today.  And Willie Nelson’s “On the road again” was just annoying me.  When The Proclaimers starting singing about walking 500 miles, that was almost the end of it for me.

Before my first 24 hour race in 2013 I was given some important advise: “Beware the chair”.  In other words, avoid sitting down at all costs.  And in most of my races I apply a rule that if the race is too short to need a sleep mid-race, then it is too short to need to sit down too.  All of my best races have been races in which I haven’t sat down between the start and the finish, including what I consider to be my best ever athletic accomplishment – walking for 44 hours non-stop when I circumnavigated London’s M25 motorway in 2017.

But just before 15 hours was up, and just short of 68 miles in to the race, I found myself sitting in the chair outside our tent.  It was only for a few minutes, probably 5, but I was sitting down, breaking my cardinal rule.  I was mentally weak and I knew it, and I don’t think the break really made any difference to my speed either.  I just wasted 5 minutes.

I should probably mention at this stage that Suzanne had dropped out of the race early on, and had become my support crew.  If it wasn’t for her I know I would have been in much worse condition.  She was feeding me whenever I needed it, and would continue to support me through to the finish.  I asked Suzanne how Kathy was going and she pointed to the corner of the tent where Kathy was sleeping.  She wasn’t having a good race either, but in Kathy’s defence, she had completed a six day race less than 4 weeks earlier.

I completed another 10 laps at an average of 30 to 32 minutes per lap before I found myself sitting down in the same chair again.  This time for about 8 minutes.  I was not enjoying the race at all, but with just 12 miles to go I knew I should be able to complete 100 miles within the 24 hour time limit, and until I was 100% certain that that wouldn’t be possible, I would keep going.

I finally reached 100 miles in 23 hours 29 minutes and 40 seconds.  There was never any thought of continuing through to 24 hours.  I had dropped from a best position of 9th place (which I held from 40 to 56 miles) to 18th place, being passed by a flying Margy Michiels, who walked the last lap in 26 minutes against by 31, with about 50 meters to go.

I believe that the problem was 100% mental.  There is a saying that “an ultramarathon is 90% mental, and the other 10% is in your head” and I think this was very much the case for me here.  My injuries (left foot arch and right glute) didn’t really cause any problems, but reviewing my heart rate I see that for a large amount of the race my heart rate was less than 100 beats per minute and at times it got down as low as 60!  I just wasn’t putting in the required effort.

The good news is that if I can suffer for 20 hours and keep moving at a pace fast enough to complete 100 miles in less than 24 hours, then when times get tough in my upcoming 250 mile races, I know that I will be able to keep going.  I just need to remember that when it gets hard next time.

And that brings me to what I’ve got coming up next.  Having sworn to myself during the race that I wouldn’t do it, four days after getting home I entered the Thames Ring 250 (TR250) which starts on Wednesday 26th June.  I’ve never entered a race that I haven’t had 100% confidence in my ability to finish before I started, but having come off three less than stellar races this year (Last One Standing, Castleward where I was eliminated after just 18 hours, Belfast to Dublin Return in which I DNF’d at 160 miles, and now the Continental Centurions Race), and having DNF’d my last attempt at the TR250 at 132 miles, there is absolutely no guarantee that I’ll finish this next challenge.  That said, my wife has told me not to come home if I don’t finish, and I’ve told the race organisers that they are not to collect me if I ring them to drop out.  So this will be a big test of my mental strength.

I’ve also entered the Lon Las CYMRU 250 mile Ultra from the north west corner of Wales down to Cardiff (south west corner) in October, but more about that later.

23 walkers completed 100 miles in under 24 hours at Weert this year with 15 of them joining the Continental Centurions club as new members.

On the day after the race, someone asked me on facebook why I push myself through events like this.  She asked why not walk 3 x 33 miles and enjoy them all, rather than suffer through one long event.

It isn’t easy to explain but I can tell you that I wouldn’t have it any other way.  I am so lucky to be able to compete in events like this.  Many people can’t – or won’t.