After spending a large proportion of the last seven months fighting off a foot injury I was looking forward to the opportunity to spend 24 hours on my feet in the French 24 hour race-walking championships during the weekend of the 21st/22nd April.  I wasn’t too concerned about distance or placing – after all it was the French national championships so the field would be strong – but given that my longest walk in the last seven months since the 2017 Roubaix 28 hour race was only seven hours (which I had done both two and three weeks earlier) I was keen to see if my foot, my endurance, and my mental strength would hold up for 24 hours.

The race was being held in the grounds of Dijon Université, Dijon, 200 miles south east of Paris.  I travelled there by train the day before the race and this proved to be a bit of an adventure itself.  I caught the Eurostar train from London to Paris and about half way to Paris the train stopped for 30 minutes due to a computer malfunction.  My travel itinerary gave me 66 minutes to travel across Paris from Gare du Nord to Gare de Lyon to change from the Eurostar to the French SNCF highspeed train from Paris to Dijon and there wasn’t time to spend 30 minutes sitting in the middle of the French countryside waiting for the trains computer problems to be resolved.

As it was, I made it to Gare de Lyon with a couple minutes to spare, but by the time I located the platform that the train was leaving from I was too late.  The train had gone.

The good news was that the train company were able to put me on to the next train which was only 30 minutes later and I arrived in Dijon around 5pm.

The next part of the adventure involved a 30 minute tram ride to the university and then locating someone within the race organisation crew that spoke English.  Maybe I should learn some basic French 🙂 .  In all my previous French races (This was my eighth race in France in four years) other walkers from the UK had also been competing, and I had left any conversations to them.  This time I was the only non-French competitor in the race, which actually proved beneficial because the race director knew I had booked accommodation at the university so whilst she couldn’t speak English she was able to show me (on a map) where to find my accommodation – which was about a 1km walk away in the other corner of the university grounds.  All a part of the adventure, but next time I think I will be tempted to stay in a hotel near the Dijon railway station and catch the tram to the university on the morning of the race.

After checking in to my room I caught the tram back down to Dijon as I wanted to see a little bit of the town and also get something for dinner as well as some food supplies for the race.

Working on the basis that if it is good enough for Usain Bolt to eat, then it is good enough for me, I ‘purchased’ 20 chicken McNuggets and a large fries (about 1,700 calories) for dinner.  I say ‘purchased’ because I didn’t actually pay for my dinner.  McDonald’s have large touch screens that enable customers to place their orders without actually speaking to anyone.  All you do is touch the pictures of what you want to eat.  You can select a language when you start your order, which I did, but when it came to the payment stage the language changed back to French and whilst I thought I had selected the option to pay by credit card, the machine didn’t ask me to pay and gave me the docket showing my order.  I assumed that that meant I would pay at the counter when I collected my meal but when my number came up on the screen at the counter I was given my meal and not asked for any payment.  In my defense, I decided that it would be too difficult to explain the situation without being able to speak France so I accepted the generosity extended to me and took my meal.

After dinner I caught the tram back to the university and was asleep before 10pm.  There was no pre-race excitement or nerves and I didn’t have any problems sleeping like I have before some races.  This was probably because I intended to use this race as a 24 hour training walk rather than a race – although I did want to cover at least 100 miles.  And I ended up sleeping for 11 hours!  My best ever sleep the night before a race.

Breakfast consisted of another visit to McDonalds and another order via the touch screen, but this time I had to pay.  On the way back to my room from the tram the previous night I had discovered a McDonalds near the university grounds so decided that would be my best option for breakfast – another 1,000 odd calories.

I was beginning to learn my way around the local area and worked out that it would be easier to catch the tram from the stop near McDonalds to the stop near the race village (only about 700 meters) than to carry my bag that distance.  After all, I didn’t want to walk any further than I had to before the race started at 1pm.

I arrived at the race village at 11am and organised my food supplies on my allotted table within the sports hall that we would walk through at the end of each lap.  The course started with a 1,496 meter lap and then multiple 2,525 meter laps until 23 hours into the race when we would change to a smaller 770 meter lap for the last hour of the race.  At the end of each lap we walked through a sports hall that contained all the timing equipment, the race food table, and the individual athlete’s food tables.  My intention was to eat food provided by the race organisers most of the time, but I had a range of mixed calories for when I wanted something a little different or more than the 1 or two biscuits or couple pieces of fruit that were offered at the main food table.  As it was, this turned out to be a good idea as there wasn’t much food variety on the race table – just oranges cut in to eight pieces, crackers, and bananas cut up into very small pieces.  And also coke, water and orange juice.

After setting up there was one last opportunity for something to eat – six croissants stuffed with ham – another 1,500 calories, give or take.

A few minutes before race start I went to the toilet and found that my urine was a dark colour meaning that I was already dehydrated before the race had even started.  The temperature was already in the mid 20’s and I couldn’t afford to be dehydrated but it was too late now.

We walked the short distance to the start and stood in the shade of a nearby building until the last possible moment.  There were 30 walkers in the 24 hour race and another 15 or so in the 2 x 6 hour race that took place during the first and last six hours of the main event.

At precisely 1pm we were off.  I started off slowly as planned, walking at a speed of 7.5km/hour.  If it wasn’t so hot I would have started a little faster but I decided that I would just take it easy and focus on keeping myself wet and cool by pouring water over my head and drinking small quantities of water at every opportunity.  Many walkers didn’t start conservatively though, and I was lapped by the leader after just three complete laps – I had walked 7.5km in an hour and the leader (who dropped out after less than six hours) had already done 10km.

After an hour I was in 18th place but feeling comfortable, and over the next six hours I slowly moved up the field while continuing to walk a steady 7.5km an hour – 20 minutes per lap give or take.  In the first seven hours my fastest lap took 19 minutes and 44 seconds and my slowest lap was just 53 seconds slower at 20 minutes and 37 seconds.  A consistent pace.  The results screen showed that I was in 8th place at 7 ¼ hours meaning that 10 of the walkers who had started faster than me had either dropped out or were already suffering the effects of the heat.

My initial plan, regardless of the heat, had been to walk easy for the first 7 hours and then pick the pace up going into the night section, but I decided to maintain the pace for a few more hours rather than increasing my effort.

By half-time (the 12 hour mark) I had moved up to 6th place.  My pace had just started to drop in the last three laps (see my pace graph at the bottom of this race report) so I had my first can of coke and chocolate bar, switched from listening to podcasts to high tempo music, and picked up the pace.

I passed through 100km in exactly 13 hours 24 minutes with my 100km lap and the next one being my fastest of the race at 18 minutes 55 seconds each, and I felt great through until 17 hours.  For a long time I appeared to be walking faster than everyone else on the course.  I had moved in to 5th place and thought I had a realistic change of getting into the top three.

And then the wheels fell off!

It was at that stage that I noticed (or thought I noticed) that the walker in 6th place was only 14 minutes behind me – at the end of each lap we passed a large screen that showed our current place, distance, and how far we were behind the athlete in front of us.  I thought I was just over a lap ahead of 6th place and therefore had 24+ minutes up my sleeve, but it appeared that this wasn’t the case and I instantly picked up the pace – proving that my bad patch was more mental than physical.  The next two laps took 21:12 and 20:36 respectively – over 4 minutes faster than my average lap speed of the previous few hours!

On completing my 66th lap I was 23 hours and 18 minutes into the race and I was diverted on to the smaller 770 meter lap for the last 42 minutes of the race.  I managed to maintain my new-found speed and completed the 24 hour event with an overall distance of 170.714km for 5th place.

Some thoughts about the race: 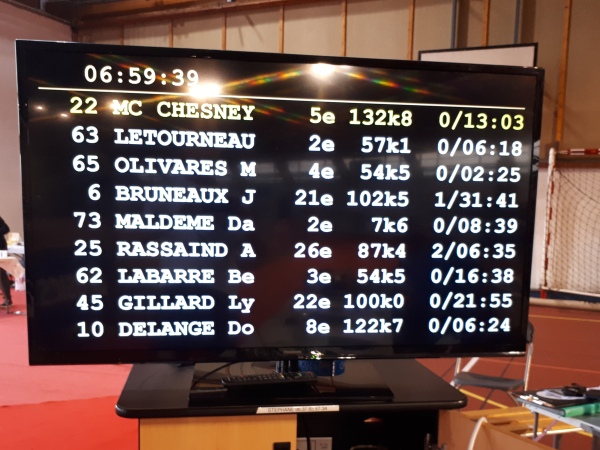 I took the above photo at 18 hours.  It shows that I was in 5th place and had completed 132.8km and was 13 minutes and 3 seconds behind 4th place.  It is only now, when I look at the photo, that I see that the six hour walkers are also listed on the screen.  I suspect that what I saw at the 100 mile mark was that the 6th place six hour walker, and not the 6th place 24 hour walker, was 14 minutes behind the 5th place 6 hour walker (not me), but seeing this was enough to jolt me back to life and I picked the pace up again, walking the next two laps in 21:12 and 20:36.  The fact that I was able to pick up the pace so easily also shows that my 4 hour bad patch was all mental and not physical. 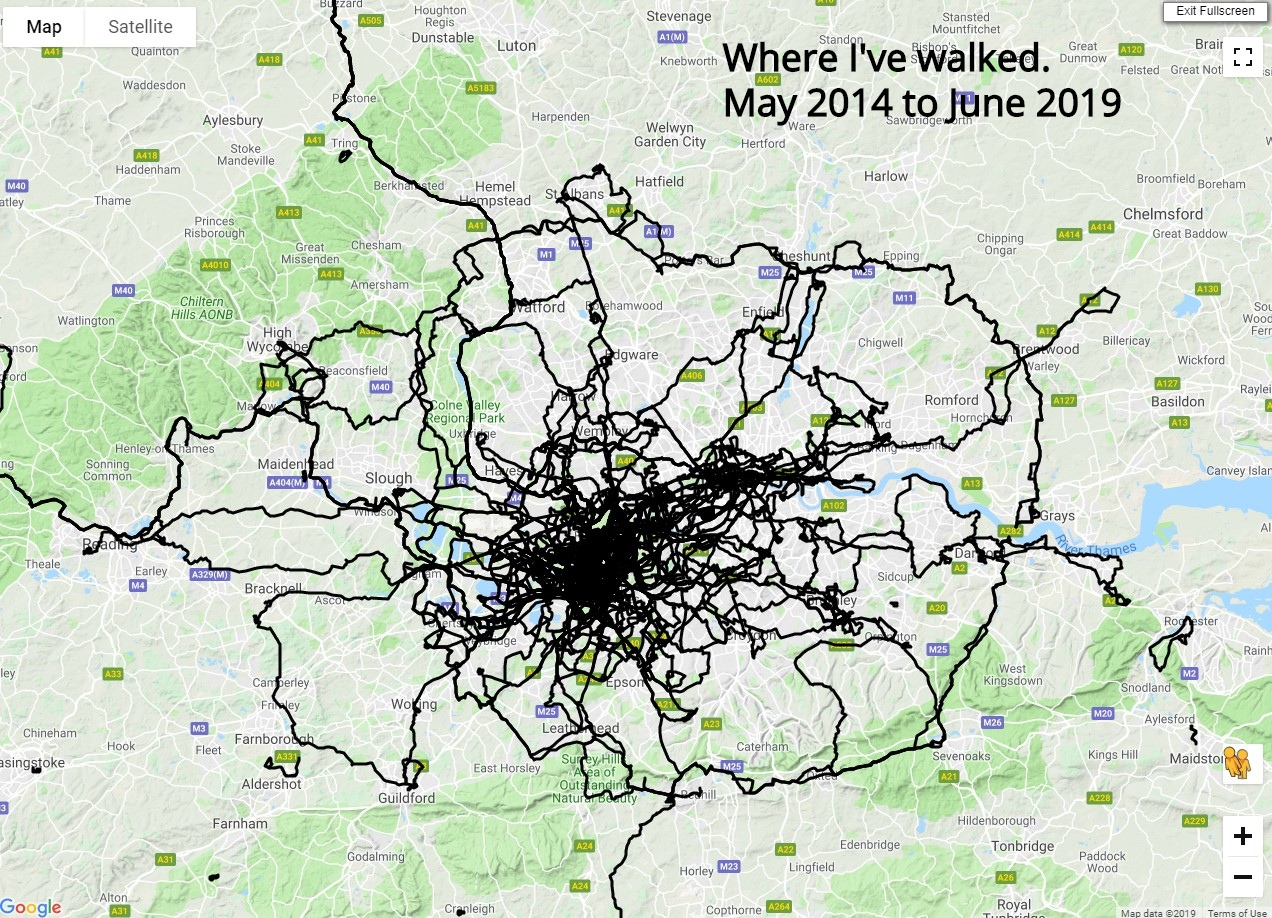