Date: 10th January 2021
I found this race report which I wrote after the UK Centurions race at Southend-on-sea in August 2014, so thought I would add this to my blog.

I was waiting until the results are finalised before writing my race report from last week but it looks like it will be next week before the final results are published.  The good news is that it sounds like the organisers have agreed with my lap recording and that means that I did complete an extra 5 laps and will probably be moved up one place in the results and my official time will be around 22:39.

Before I analyse my race I need to thank Zac for his support throughout the whole race – even if we did almost get disqualified when the judges suggested that he was pacing me for the 3 ½ minutes that we were watching the games 1,500m final on his cellphone on Saturday night!

Zac went to bed just after I finished my first bad patch at around 80km but couldn’t sleep and was there to support me when I really needed it over the last 60km – so thanks Zac.

The graph shows my average lap times throughout the 407 laps. I took a split time every 5 laps so each bar in the graph is the average time per lap during that 2km segment.  For the first 46km there was only a 5 second difference between my fastest and slowest (2:58 to 3:03 – 7:30/km pace). From 52km my times started to steadily decline through to 80km when I was down to what I thought (at the time) was a slow 3:26 average lap (8:35/km pace) and I was going through my first (and worst) bad patch. 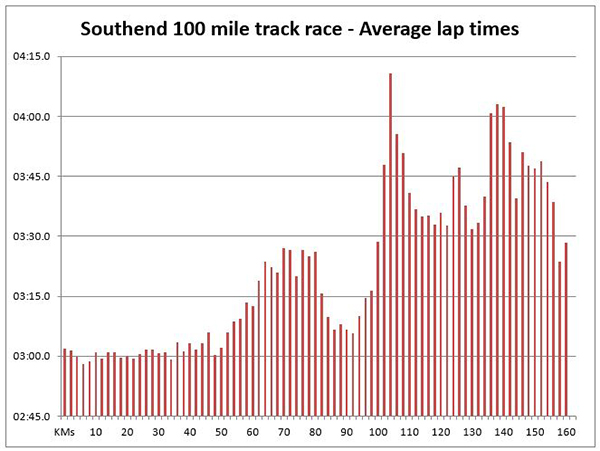 I noticed that most of the other competitors were listening to their ipods – something I have never done in a race before – so Zac gave me mine and within seconds I was 15+ seconds a lap faster!  But that only lasted through to 100km which I passed in 13:06.

My second bad patch didn’t last long but I drifted out to over 4 minutes per lap and starting thinking I might not make the 24 hour time limit so at 110km I got my ipod back from Zac and again my lap times came back down – for a while.

The rest of the race was a mixture of ups and downs but overall I felt reasonably good but just couldn’t go as fast as I wanted (needed) to go.

My ‘A’ goal was sub 21 hours which I think my physical fitness was capable of but on the day I proved to myself that I still need to do a lot mentally to be able to achieve that sort of time – the plan was to average 3 minute laps for the first 10 hours but while I was back to 3:05’s at 12 hours I lost a huge amount of time between 8 and 11 hours and slowed too much after passing 100km to have any chance of that goal.  My ‘B’ goal was sub 23 hours which I achieved.

A couple other things from the race: